An invasive green crab that was caught in Metlakatla. Metlakatla Fish and Wildlife Division officials are keeping the live crabs in a refrigerator while more information is gathered. (Photo courtesy of Albert Smith).

Metlakatla wildlife monitors say they have found more than a dozen invasive European green crabs in the waters around Annette Island.

When invasive green crabs were first spotted on the beaches of Annette Island on July 22, the creatures were dead. This time they were alive.

Community Fish and Wildlife Division personnel combed the beaches and waters around Metlakatla for the five-spined, spindly-legged creatures that federal officials have called one of more invasive marine species around.

And on Wednesday, the tribe announced they had found 10 live crabs. This tally includes four from the end of last week and six from Tuesday. And Albert Smith, the mayor of Metlakatla, said three more crabs were caught on Thursday for a total of 13.

The crabs largely fall into salmon traps around Tamgas Harbor.

“There’s a salmon trap that’s been there for hundreds of years,” Smith explained. “And that’s kind of where they sort of congregate. Because it’s like a tidal pool. So that’s where they caught them.

Shrimp traps are also set up to catch crabs, which is how Fish and Wildlife Division staff caught a crab on Thursday. Another was found in an area with lots of seagrass. 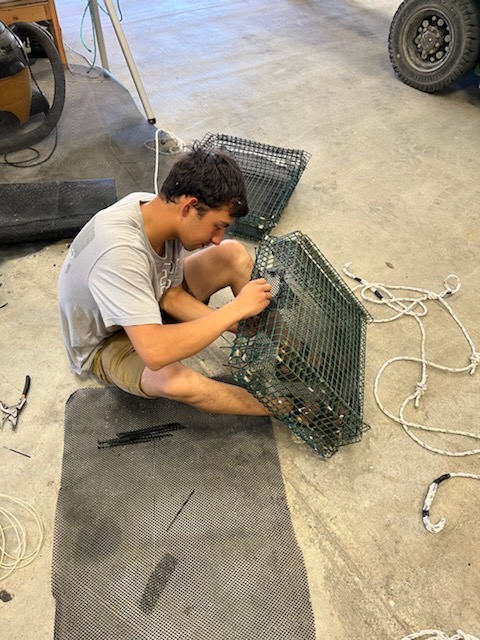 Spencer Guthrie of the Metlakatla Indian Community Fish and Wildlife Division works on an oyster bucket. The container will be used to catch invasive green crabs. (Photo courtesy of Albert Smith).

Of the 13 live crabs trapped, three are female and 10 are male. Smith said the tribe’s scientists are preserving them alive for the time being for research.

“The people catching them are our Fish and Wildlife staff,” Smith said. “So they bring them straight to the office. And then we put them in a bucket of water, then put them in the fridge until they can get all the data they need. 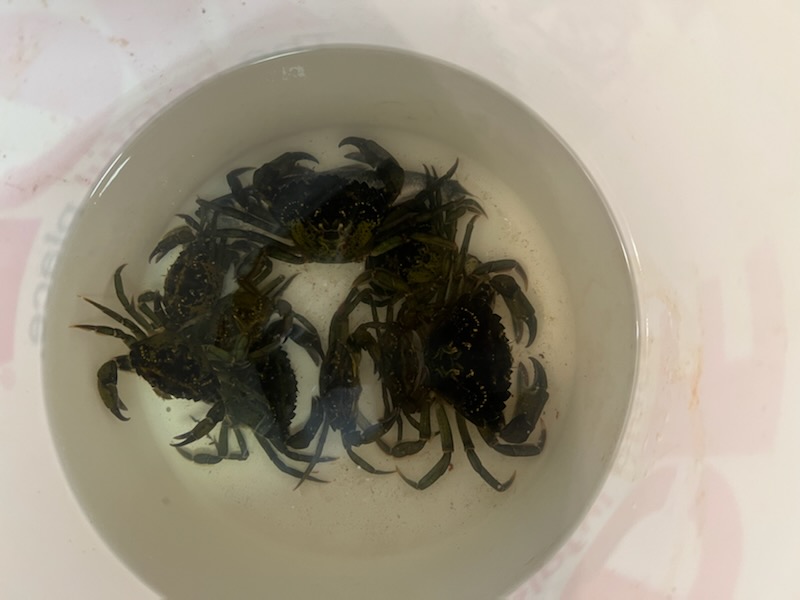 Invasive green crabs are seen in a bucket of seawater. To keep the crabs alive while more information is gathered, the Metlakatla Fish and Wildlife Division keeps them in a cool bucket in a fridge. (Photo courtesy of Albert Smith).

Smith noted that the crabs can live quite a long time in these conditions, and the seawater in the buckets is changed regularly.

Crab carcasses can also be preserved with rubbing alcohol.

In a statement, the Metlakatla Indian community said tribal authorities are working with federal and state partners to conduct DNA testing and outreach efforts.

“It is essential that we address this matter urgently as the GC (green crab) targets juvenile Dungeness crabs, juvenile salmon, crustaceans and molluscs,” the statement read. “This species poses a real and current threat to our most critical subsistence and commercial resources.”

Smith said he was concerned about what this means for the community’s traditional food sources.

“They prey on salmon habitat and salmon fry,” he said. “Plus, they’re attacking most of our subsistence way of life.”

But at the same time, the findings didn’t come as a complete surprise.

“And then we saw them coming up the coast, into Haida Gwaii,” Smith said. “And then also by Prince Rupert last year, which is not far from here.”

Smith said he would like to avoid a situation like Washington state’s experience with invasive crabs. The appearance of the species prompted Governor Jay Inslee to issue an emergency proclamation.

For now, Metlakatla scientists are monitoring the area and trapping the crabs. The objective of this work is to find out more about the number of people likely to be in the area.

As for what to do with the crabs, NOAA strongly advises against releasing invasive crabs into the water. Smith said the community is still discussing options, but he noted that adding the crabs to the community’s backyard compost pile might be a good idea.

Raegan Miller is a member of the Report for America body for KRBD. Your donation to match our RFA grant helps him keep writing stories like this. Please consider making a tax-deductible contribution at KRBD.org/donate.